Shizen Energy Inc. (“Shizen Energy”) and Northland Power Inc. (“Northland”) (TSX: NPI) announce the signing of an agreement to work together to develop early stage offshore wind development opportunities in Chiba Prefecture, Japan. Under the terms of the agreement, the partners will establish a 50:50 joint venture (Chiba Offshore Wind Inc.), which will serve as the development vehicle for the projects. The joint venture is pursuing projects that have a combined capacity of approximately 600 megawatts (MW). 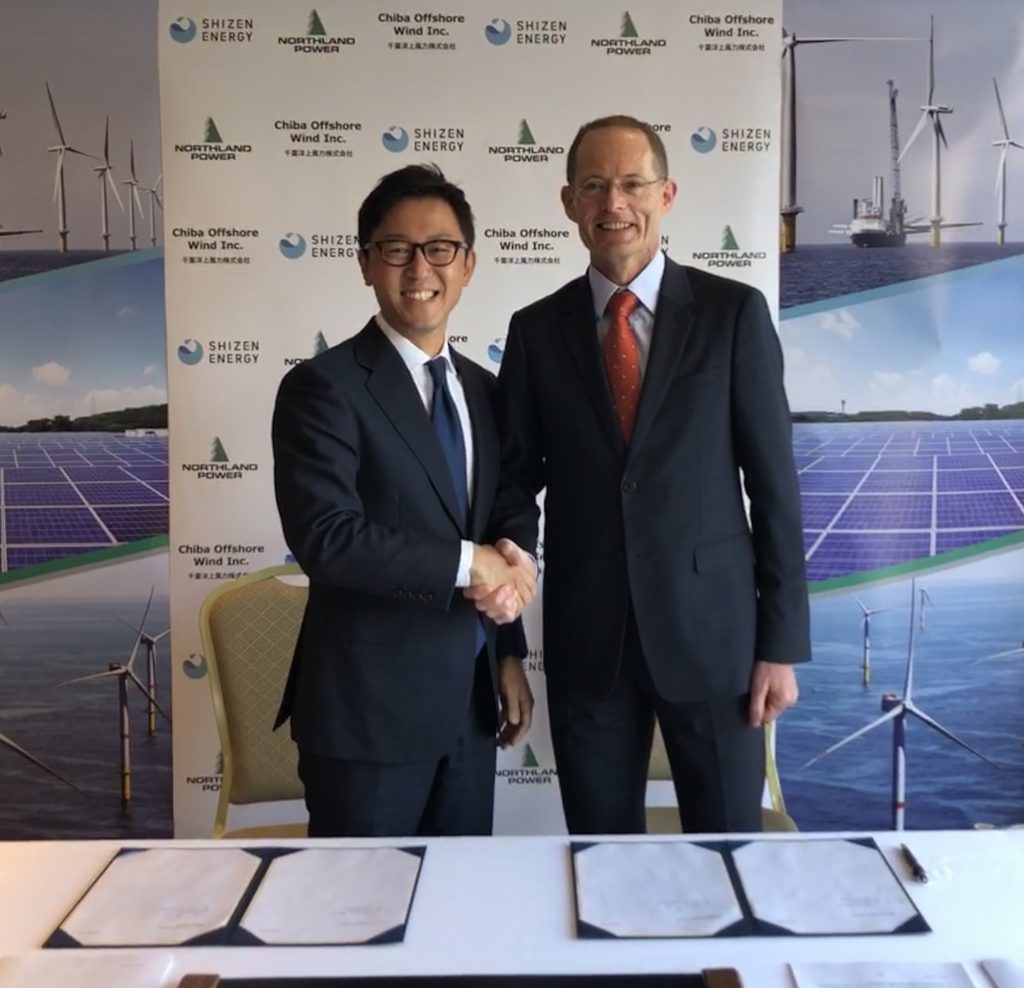 Japan’s offshore wind market is gaining momentum following the government’s commitment to increase the deployment of renewables and the passing of the legislation that supports large-scale offshore wind development areas. The Japanese government issued an updated Energy Supply Plan in July 2018, targeting 10 GW wind capacity (offshore and onshore) by 2030 as part of its ambition to reach a 22-24% renewable share of electricity generation by 2030.

Northland Power is a global developer, owner and operator of sustainable infrastructure assets with over 30 years of successfully developing, constructing and operating power projects over full lifecycle. With a global fleet of assets generating in excess of 2.4 GW, the company has operating facilities in Canada, Latin America, and Europe. In addition, Northland has a project pipeline of 1.4+ GW under construction and advanced development, including Asia, where it owns a 60% equity stake in the 1,044 MW Hai Long project under development in Taiwan.

Shizen Energy has contributed to the development of approximately 1 gigawatt worth of renewable energy in Japan and is expanding its portfolio to include solar, onshore & offshore wind, biomass and hydro power generation. As Shizen Energy also aims to expand its global businesses, it completed the construction of its first overseas solar power plant in Brazil in July 2019. Further, Shizen Energy has started working on wind and solar projects in Vietnam and Thailand.

“We are excited to partner on this joint venture with Shizen Energy, which marks Northland’s entry into the burgeoning Japanese offshore wind industry,” stated Mike Crawley, President and Chief Executive Officer of Northland. “With Shizen Energy’s strong track record of developing and constructing renewable projects in Japan, and Northland’s success developing, constructing and operating offshore wind farms globally, we view this agreement as an excellent opportunity to combine the strengths of the two companies to achieve something great.”

Masaya Hasegawa, Shizen Energy’s Representative Director, commented: “‘Taking action for the blue planet’ is our company’s foremost priority, and we hope to pass the blue planet on to the future generations. To achieve this goal, we aim to grow as a company and cooperate with other businesses worldwide to shape our common future. We strongly believe that our partnership with Northland will allow us to put that vision into action and bring us a step closer to making a positive impact on the future of our blue planet.”

Northland Power is a global developer, owner and operator of sustainable infrastructure assets that deliver predictable cash flows. Headquartered in Toronto, Canada, Northland was founded in 1987 and has been publicly traded since 1997 on the Toronto Stock Exchange (TSX: NPI).

The Company owns or has an economic interest in 2,429 MW (net 2,014 MW) of operating generating capacity and 399 MW of generating capacity under construction, representing the Deutsche Bucht offshore wind project in the German North Sea and the La Lucha solar project in Mexico. Northland also owns a 60% equity stake in the 1,044 MW Hai Long projects under development in Taiwan.

Founded in June 2011. With the purpose of “We take action for the blue planet”, Shizen Energy has contributed to the development of approximately 1 gigawatt (as of the end of July 2019) worth of renewable energy across Japan. It is engaged in all services required for the installation and operation of solar, wind, small hydroelectric, and other renewable energy power plans, such as development, EPC (engineering, procurement, construction), O&M (operation and maintenance), electricity retail market, and asset management.

The company intends to construct photovoltaic power plants in countries around the world, beginning with the regions of Asia and South America. In 2019, it completed the construction of its first overseas power plant in Brazil.