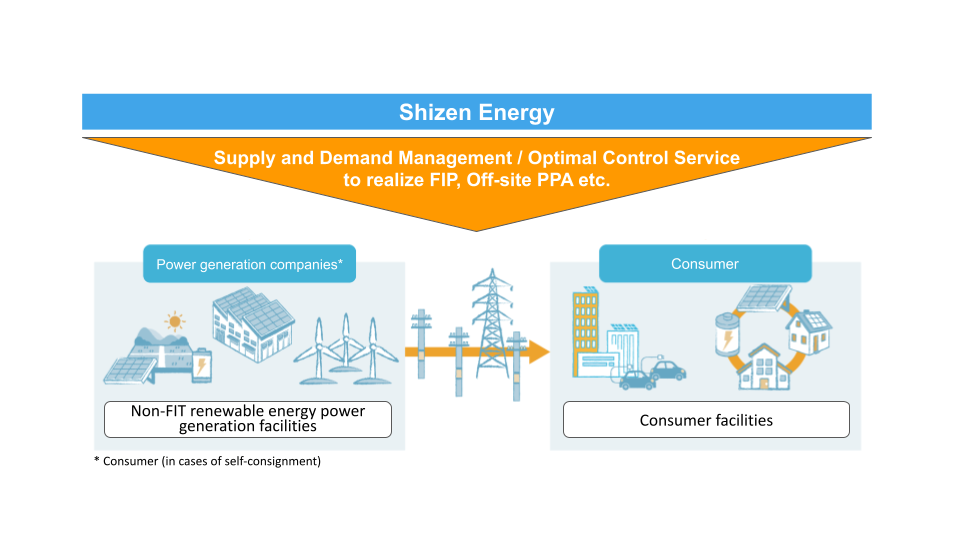 This service will support supply and demand management operations such as power generation forecasting, submission of plans to OCCTO (Organization for Cross-regional Coordination of Transmission Operators, JAPAN), and bidding to JEPX (Japan Electric Power Exchange), which are necessary for the operation of non-FIT power sources[* 3], in anticipation of the introduction of FIP in April 2022 and the introduction of non-FIT power sources such as self-consignment and off-site PPA. This service also provides optimal control of energy resources such as storage batteries to avoid imbalance. [* 4].

※ date and content may change without prior notification

Shizen Connect can control residential solar power generation with storage batteries and  V2H [* 6] equipment, as well as remote monitoring of mega solar facilities, operation of microgrids [* 7] connecting multiple buildings with transmission lines, and VPP construction of several thousand units of energy resources. A newly developed function for renewable energy aggregation has been added to this system.

※1 FIP (Feed-in Premium) : a scheme that adds a premium (surcharge) when selling electricity from a renewable energy source.

※3 FIT (Feed-in Tariff) : a scheme in which major electric power utilities purchase electricity from a renewable energy source at a fixed price for a fixed period of time.

※4 Imbalance : The difference between the planned amount and the actual amount of electricity. The charge including the penalty element that must be paid for the difference is called the “imbalance charge”.

※6 V2H (Vehicle to Home) : sending the EV electricity to the house.

※7 microgrid: a small-scale power system with a power supply and demand equipment normally connected to the electrical power grid, but designed to shut off in the event of a disaster so it can stand on its own with its internal power equipment.

【Shizen Energy Inc.】
Founded in June, 2011. With the PURPOSE of “We take action for the blue planet”, Shizen Energy Group has contributed to the development of approximately 1GW of renewable energy throughout Japan (as of December, 2019). The company’s business includes development, engineering, procurement, construction (EPC), operation and maintenance (O&M), and asset management businesses for the installation and operation of large-scale renewable energy power plants. It also provides decarbonization solutions such as power purchase agreements (PPA) for medium and small-scale power plants and electricity retailing. Since 2016, the company has also been focusing on its overseas operations, expanding its development and power generation projects in areas such as Southeast Asia and Brazil.

【Shizen Connect】 （website: https://se-digital.net/connect）
Shizen Connect is an aggregation energy management system that collectively controls energy resources such as renewable energy power generation, storage batteries, EVs, and EQs. Shizen Connect can control residential solar power generation with storage batteries and  V2H equipment, as well as operation of microgrids connecting multiple buildings with transmission lines, and VVP construction of several thousand units of energy resources. Individual control and VVP control tended to be separate, but Shizen Connect provides a one stop service allowing energy resources to be utilized with multi-purpose which also  improves economic efficiency. It is also vendor-free, allowing energy resources to be chosen freely, regardless of the manufacturer.