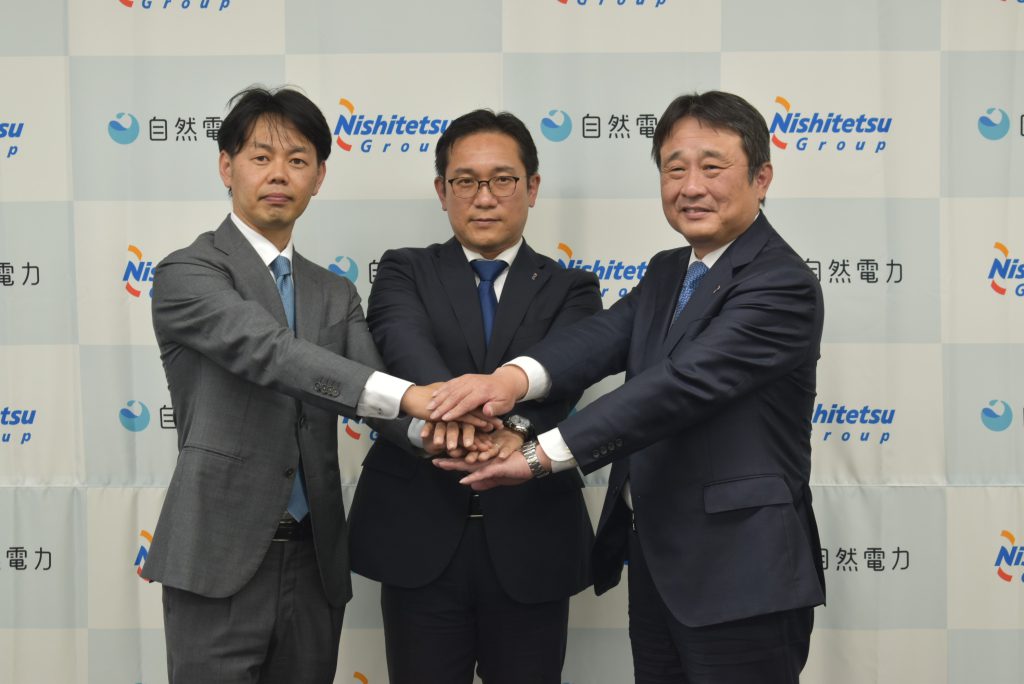 As countries around the world are currently moving toward the goal of eliminating greenhouse gas emissions by 2050, the same trend is accelerating in Japan.

This collaboration between Nishitetsu, which has been operating its main businesses in Kyushu and Fukuoka for more than 110 years, and Shizen Energy, which has been developing and supporting renewable energy projects in Japan and overseas for more than a decade, will speed up the process of decarbonization and regional resilience in the Kyushu area.

In carrying out the project, Nishitetsu will provide information through its regional network, install the power generation system in its own group facilities, and utilize idle land, while Shizen Energy will provide its expertise in project development, construction, maintenance, and other services.

The project aims to complete construction of 30 MW of renewable energy power generation facilities by FY2025 (6.5 MW by the end of FY2023).

＜Nishitetsu comment＞
The Nishitetsu Group recognizes that preservation of the global environment is an important issue in order to contribute to the realization of a sustainable society and to be a company that is trusted by society and continues to grow over the long term. Through this collaboration with Shizen Energy, we will speed up the development of renewable energy sources and energy management initiatives, as well as supply green power to the Nishitetsu Group and beyond. In the future, we will also supply power to EV buses and other vehicles owned by our own company, as well as to other transportation and logistics providers and EVs owned by local municipalities, in order to accelerate decarbonization and practice sustainable management.

＜Shizen Energy comment＞
We have been involved in more than 1 GW (1 GW = equivalent to approximately one nuclear power plant) of renewable energy projects in Japan and overseas based on our company purpose of “We take action for the blue planet.” In the collaboration with Nishitetsu, we will combine the strengths of both companies and consider not only the creation of renewable energy sources, but the use of digital technology for private consumption at factories and commercial facilities, and the effective use of renewable energy in mobility, such as EV buses. Currently, the energy conversion and transportation sectors account for more than 50% of CO2 emissions in Japan. Through this collaboration, we hope to synergistically accelerate the structural shift toward decarbonization in both sectors, thereby contributing to the decarbonization of Japan.

【About Nishi – Nippon Railroad Co., Ltd.】
This year marks the 114th anniversary of the founding of our predecessor company, Kyushu Electric Railway Company, in 1908.
The Nishitetsu Group, under the corporate message of “Connecting your dreams,” is engaged in a wide variety of businesses that support the daily lives of local residents. Our automobile transportation division, one of the largest in Japan, and our railroad division, which has two lines, the Tenjin-Omuta Line and the Kaizuka Line, transport approximately 2.02 million passengers per day. In addition, our divisions including international logistics, urban development, and real estate also continue to grow steadily.

【About Shizen Energy Inc.】
Founded in June, 2011. With the PURPOSE of “We take action for the blue planet,”Shizen Energy Group has contributed to the development of approximately 1GW of renewable energy throughout Japan (as of December, 2019). The company’s business includes development, engineering, procurement, construction (EPC), operation and maintenance (O&M), and asset management businesses for the installation and operation of large-scale renewable energy power plants. It also provides decarbonization solutions such as power purchase agreements (PPA) for medium and small-scale power plants and electricity retailing. Since 2016, the company has also been focusing on its overseas operations, expanding its development and power generation projects in areas such as Southeast Asia and Brazil.