Shizen Energy hopes that by involving an increasing number of partners who agree with our purpose, the establishment of the fund for Co-creation will allow the company to get closer to its purpose of achieving a “100% renewable-powered world” and have an impact on the future of the Blue Planet.

Background of the establishment of the fund
Global appeals for a switch to renewable energy are growing in urgency over time through, for example, the Sustainable Development Goals (SDGs), the UN Framework Convention on Climate Change (COP), the UN Principles for Reasonable Investment (PRI), Environment, Social and Governance (ESD) investments, and the RE100 Initiative. Even in Japan, consciousness on natural energy is growing as evidenced by private users’ participation in RE100: 100% Renewable Energy Declaration (RE Action), as well as the growing number of Japanese banks who are signatories to the UN Principles for Responsible Banking (PRB). In terms of policymaking, the government is accelerating its effort to transform renewable energy into Japan’s main power source by lowering the costs of power generation, stabilizing long-term power supply, overcoming grid limitations, and ensuring adaptability. The fund is also expected to support development of decentralized power distribution systems to promote captive use of electricity or local consumption, in addition to installation of large-scale mega-solar plants. Shizen Energy defines “we take action for the blue planet” as its Purpose, aiming to facilitate the use of safe and sustainable energy through the establishment of renewable energy power plants worldwide, which serves its goal to allow more people around the world to enjoy happy lives. Since its establishment in 2011, Shizen Energy Group has been involved in power generation projects worth of over 1GW of renewable energy in total. With the investment fund, Shizen Energy aims to expand its portfolio to new locations, new energy types, and larger scales, and to work towards the achievement of “co-creating a 100% renewable-powered world” with like-minded partners.

Purpose of the SHIZEN Fund
The SHIZEN Fund is the first step towards the full establishment of the investment fund for Co-creation. It will allow investments into high-quality and locally based renewable energy projects in Japan and overseas, utilizing Shizen Energy’s experience in project development and operations from a global and local perspective, combined with a broad range of know-how of the investors. The Fund’s qualities are highlighted as below:

・Fund for development and management from early stages: Invest in projects from the development stage, and capitalize on accumulated know-how throughout the entire process including operations to further develop high-quality, locally based, and sustainable projects.
・Investment in future-oriented projects: Through investments not only in the development of large-scale energy sources (mega-solar/wind power plants etc.), but also in “future-oriented” projects such as farming model/rooftop model (households/commercial facilities) and microgrids (multiple storage battery power plant model) that contribute to the decentralized power generation, which is crucial to achieving a 100% renewable-powered world. 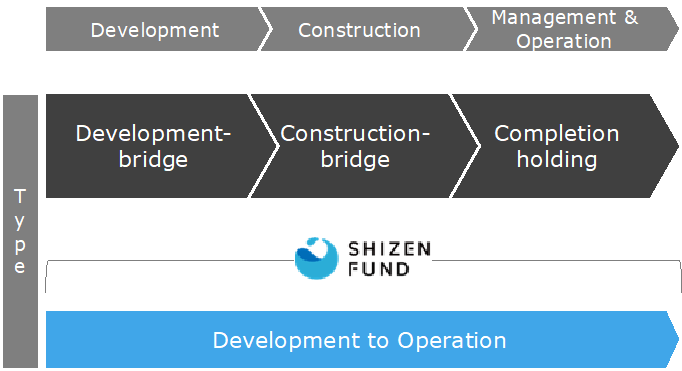