The woodchips to be used as fuel will be produced at Satsuma Biomass Fuel LLC (hereinafter the “Fuel Company”), which will be located next to the Power Plant. The Fuel Company concluded a land use agreement with the town of Satsuma on January 16, and most of the woodchips will be made from Satsuma’s unused timber resources. The Power Plant plans to use roughly 30,000 tons of woodchips per year to generate enough electricity to power 4,500 average homes (*) for a year. Japan’s Feed-in Tariff (FIT) system to purchase renewable energy at set prices will be used to sell power generated by the Power Plant to Kyushu Electric Power. Considerations are also under way to supply power generated at the Power Plant for sale as Shizen Denryoku no Denki.

“With energy transition becoming a major issue in Japan, it is very meaningful that we are creating this business starting in Satsuma. By producing energy from the abundant timber resources in the community and using it not only in the area but in cities that are eager to transition toward renewable energy, I hope we can create connections between communities, and connect rural areas with cities. With these connections, I hope we can establish relationships that will last into the future.” 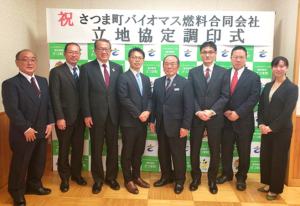 At the land use agreement signing ceremony

Shizen Energy has made the company’s purpose to “take action for the blue planet.” In doing so, Shizen Energy aims to spread the use of safe and sustainable energy through the global development of renewable energy power plants, in order for more people to live happily on Earth. Through the development, construction, operations, and maintenance of renewable energy power plants that are both high in quality, as well as rooted in the community, Shizen Energy will continue to accelerate towards the realization of a “100% renewable-powered planet.”