Shizen Energy Inc. (“Shizen Energy”) has announced the official launch of its “Minimum Grid” service which combines solar panels, storage batteries, and Energy Management System (EMS). The first usage case for the service began with installation of equipment at a care facility in the city of Miyakonojo in Miyazaki Prefecture. Service was launched in May 2020, and handover was completed on June 10.

Minimum Grid is a solar power generation system offered by Shizen Energy which combines solar panels, storage batteries, and an Energy Management System (EMS). The system offers power self-sufficiency on clear, sunny days, thus reducing (minimizing) the amount of time relying on supply from power lines and large-scale power plants such as nuclear or thermal power plants. During normal usage times, Minimum Grid lowers cost by actively drawing power from the storage batteries at peak hours and times of day with higher electricity prices (peak-cut). During power outages it functions as an independent energy source that supplies power. In addition to raising the disaster preparedness level of individual facilities, the system also has the potential to serve as an energy source in local communities in case of disasters. Minimum Grid delivers the full benefits of its combination of solar panels, storage batteries, and EMS, while also ensuring stable power usage through the purchase of power through normal power lines when cloudy weather persists and when using large volumes of power.

Shizen Energy is also making it easier for facilities to get started with Minimum Grid by offering two types of formats: [1] self-ownership by users through use of subsidies and other funds, and [2] third-party ownership and power purchase agreement (TPO-PPA) model (*1) which fully eliminates all startup costs.

As the first usage case of the Minimum Grid, Shizen Energy installed solar power generation equipment (200 kWp) together with Tesla Powerpack (58 kw output /232 kWh capacity) industrial use storage batteries and an EMS at a special care facility for the elderly called Chouyuen (the “Facility”) in the city of Miyakonojo, Miyazaki Prefecture. The Facility suffered a multiple-day power outage due to Typhoon Talim in 2017. As a result of this experience, Facility management sought to gain the ability to maintain constant power supply, air conditioning, and care equipment for the health of its residents even in extended power outages. This installation of the Minimum Grid enables the Facility to maintain usage of absolutely essential equipment such as air conditioning and heating in the summer and winter for at least two days in case of an emergency, or even longer if there are multiple consecutive sunny days. Since installation, improved energy efficiency at the Facility has lowered its electric bills to roughly half those of similarly sized facilities, with even more potential savings expected through
reduced purchases of power. 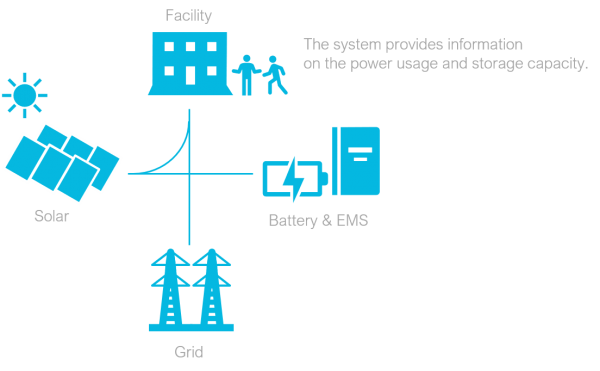 Peak-cut illustration: Prioritize use of power charged in storage batteries during high (peak) power usage hours, in evenings and at night, while reducing purchases of power from power lines. 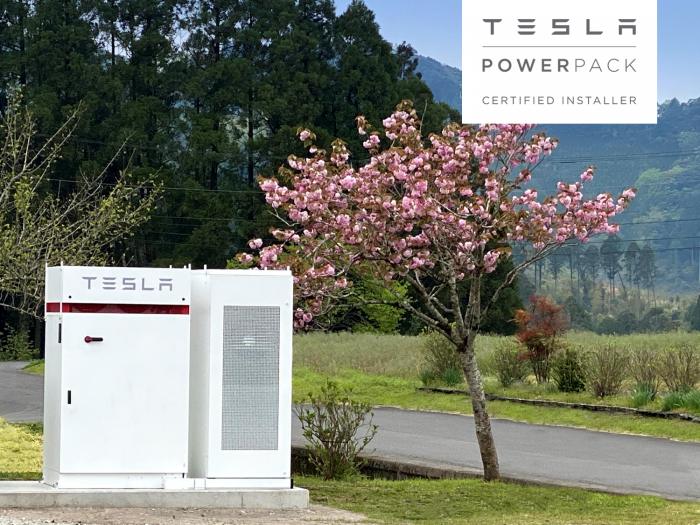 [Reference]
*1 [2] When using the third-party ownership and power purchase agreement (TPO-PPA) model, the power company (Shizen Energy) covers the initial investment for equipment installation and sells power to the consumer (the power user, such as the owner of the facility).
*2 These simulated values are for reference only, assuming specific conditions in the Facility.